Posted on November 3, 2014 by thefoxfanzine

We asked you to name your favourite ever football shirt to be in the hat for a grand prize of a copy of our latest book: ‘Shirt Tales & Short Stories.’…

This is what you chose – scroll down to find the winner, picked out at random from the big blue and white ‘Got, Not Got’ bobble hat.

“My favourite kit has to be the one as featured on the cover of your new book, Ipswich’s 1984-86 shirt based on France’s Euro 84 shirt.  For some reason though, it didn’t make Gleghorn and Brennan play like Platini and Giresse…”
John O’Leary
“My fave shirt is Denmark’s 1986 away shirt by Hummel, the reason is that it started my addiction to football shirts, just a fantastic timeless design…”
Gavin Hope

“Norwich City Asics Home 89-92…”
Andy Thomas
“Hull City home shirt about late 80s, amber with black and for the first time ever, red on the shoulders. Admiral I think. Sponsor was a local company Twydale Turkeys! Later replaced with a beer sponsor whose name escapes me…”
Darren Norton

“The Leeds United home shirt from 1990-91 with Top Man emblazoned on the front.
First season back up in the top flight and the shirt was just a thing of wonder to a 13-year-old. It became the shirt against which I’ve measured every subsequent Leeds kit…”
Chris Kendrick
“My favourite football kit is the attached 1992-3 Australia home.
It is often referred to as the ‘vomit’ kit and has become the country’s most iconic strip.
A reminder of less professional days, this kit by the short-lived ‘Kingroo’ is immortal in the eyes of any Australian football fan…”
Shaun Kastelijn 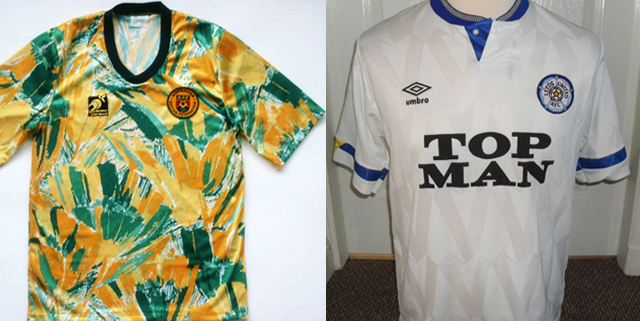 “Has to be Holland 1978, even without Johan, they were super cool.
Mum got me and Adidas orange and black t-shirt, well pleased!..”
Tony Keggin
“Sampdoria
I first saw them destroy West Ham 6-1 in the 1991 Makita Tournament and loved the originality of the shirt back then. It’s great that it hasn’t really changed either…”
Andy Lee
“Got to be Sampdoria, just oozes class…”
Alan Whybrow
“Maybe it’s not in your excellent book but for me here is my favorite top – St Etienne from the 80s…
“Nerli Ballati Marco ‏@marco_nerli

“The Le Coq Villa kit from the early 80s. Eye-wateringly stylish. And I’m not even a Villa fan…”
David Ward

“There have been many memorable, noteworthy and unforgettable kits – and many will look and feel better than the Rank Xerox-sponsored Southampton kit between 1980 and 1983 (the Air Florida and Draper Tools sponsored versions on exactly the same kit, don’t do it for me). But none will ever get close to being my favourite football shirt than that tight polyester, Patrick-manufactured shirt…”
David Breach
“Leeds United away shirt 1974 smiley badge and blue and white stripes on sleeves…”Andrew Bradley
“…and that just happens to be our new manager wearing it all those years ago, haha…”
Ben Hunt ‏@leedshunter 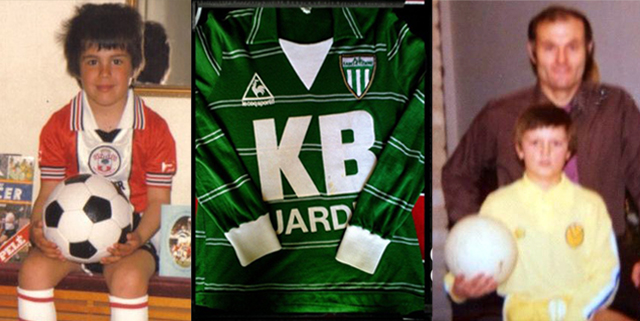 “My favourite ever shirt was the late 1970’s Clydebank home shirt. It was also my first ever shirt as a kid.
Classic Umbro – bold diamonds down the arm with red and black vertical stripes on one side…”
Andy @ScotsFootyCards
“This has got to be mine. The MCFC continental away/3rd shirt from the early 70’s…”
MCFC_Shirts ‏@MCFC_Shirts
“A tough one….I’d have to go for Newcastle adidas away kit 95-96…”
John Devlin 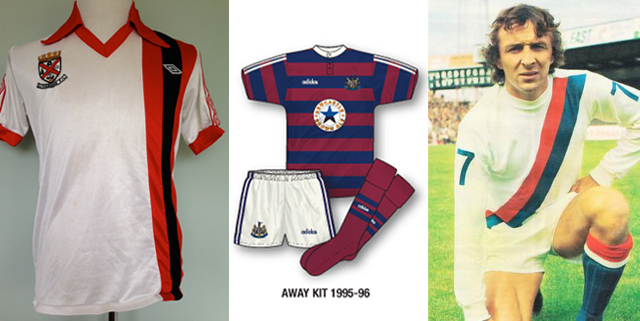 “Plymouth Argyle 60’s white shirt, with green and black hoops.
Because it is simply the most beautiful shirt ever designed…”
Nigel Rick
“Proper England kit. Admiral 1974-80…”
Dean Thwaites
“Leeds Asics 95-96 Yellow. Only worn in 3 games, never a replica, a real beauty. A nice side story that the players actually asked for buttons – the high neck on the home shirt was uncomfy!..”
leedsunitedmatchworn ‏@LeedsMatchWorn

“The classic 1979 Arsenal away shirt. Here is me modelling it, with my brother Phil…”
Paul Webster

And our picked out at random winner is DAVID BREACH, a Southampton fan… who said of the Saints Patrick shirt:
“It gave me my first sense of sporting belonging – in that shirt, I WAS Southampton. I was Keegan. I was Golac. I was Steve Williams. And every few months when my Mum butchered my follicles at the quarterly haircut, I WAS David Armstrong.
It gave us an easy way to differentiate teams in our primary school. Such was its popularity that lunchtime games in the playground were between those in the Saints shirt and those who weren’t (apparently some children allowed their mums to wash it) and it usually meant an equal number of players in each team.”
Thanks to everyone who joined in… if you didn’t win you can still go and buy a copy by clicking on the cover below. Cheers!