Posted on September 26, 2015 by thefoxfanzine

Timpo were best known for their Saturday morning adverts for ‘Wild West Trains’ and all the cowboy, indian and cavalry figures that went with them… but they also dipped their toe in the waters of football…

This set came unpainted, like the Airfix Footballers sets, only in dull pink, and they were slightly bigger and more substantial than their Airfix counterparts.
Some of the poses were also a bit odd, but we like them…

Has anyone else ever seen them?

All ‘Got, Not Got’ titles are currently available on Amazon. Plus Newcaslte, Tottenham and Southampton coming very soon.

GOT, NOT GOT  THE LOST WORLD OF FOOTBALL 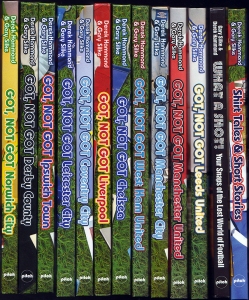