Here’s a tiny selection of the football cards, stickers and collectables featured in the three imminent new books in the Got, Not Got: The Lost World of Football series. Swapsies, anybody?

Following soon, next month, is the eagerly awaited Fully Programmed – and would you believe that will be the NINETEENTH (19TH) in the series?

But first up come Southampton, Newcastle and Tottenham… Got got got. 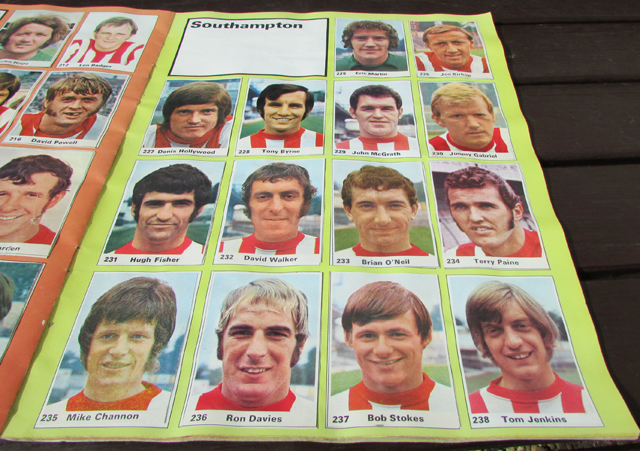 Here’s the Saints page from the Top Teams album of, er (checks on Nigel Mercer’s priceless footy card site) 1971/72, published by Marshall Cavendish, who brought us the Book of Football in 234 weekly parts. Gah, best let Nigel tell you about it. Interestingly, Terry Paine looks a bit like Alvin Stardust (more Morrissey, elsewhere), and Tom Jenkins looks a lot less like Mark E Smith out of The Fall than he did on his A&BC card the previous year. Show ’em, Nigel.

And you thought The Sun was a good-for-nothing scandal sheet? Things must have been  slightly different before the awful Murdoch era, as hinted at by their production of thousands of these beautiful Soccerstamps. A tiny perforated window into St James’ Park pre-season back in 1971/72. Look right into those sunny pixels, remember those gym benches round the edge of the school hall at assembly, and sigh.

And so to Spurs’ A&BC cards from the same era. Always excellent posers, the Spurs  lad, out at their Cheshunt training ground, with warm and winning smiles. Say cheese…

Nice one, Cyril. And nice one Big Chiv, too.

Tons more where these came from… watch this space/all good bookshops/Amazon/etc.