Posted on February 24, 2013 by thefoxfanzine

As the decades pass, with decreasing hopes of England ever being able to repeat their solitary World Cup win, those images of 1966 grow ever more ethereal and distant, like a vision of Heaven. 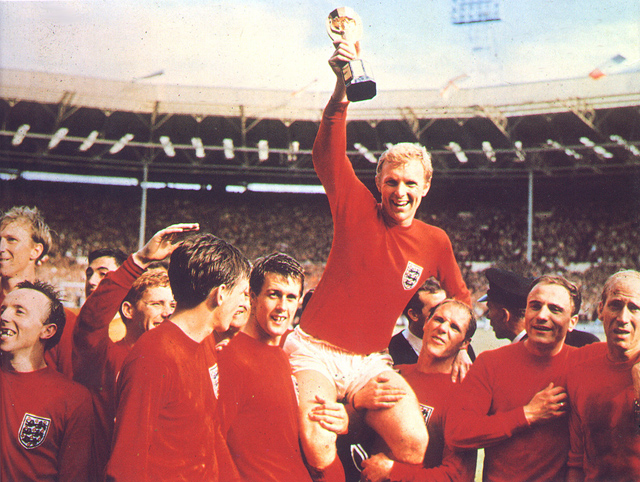 Watching slow-motion footage of the post-match Wembley celebrations is like being absorbed into a stained-glass window, backlit by the setting sun.
The shirts, unadorned but for the three lions, are impossibly red.
The Jules Rimet trophy glitters like the Holy Grail.
And the golden-haired captain Bobby Moore, beatific smile on his face, is held shoulder-high like a religious icon…

Robert Frederick Chelsea Moore was born in Barking in April 1941, a month before the Luftwaffe called off their bombing raids on London.
Despite the deprivations of war he grew into a chubby little lad, who was decent on the football field for WestburySchool and South Park Boys, but not outstanding.
He was good enough to skipper Barking Primary Schools, and represent Essex, and a scouting report that described him as ‘useful’ saw him invited along to Upton Park for twice-weekly coaching sessions with West Ham’s youth academy.
Hammers’ centre-half Malcolm Allison helped with training, and recognised something in Moore despite his limitations – a lack of pace and aerial prowess. Allison helped the youngster work on his strengths: an ability to read the game and great awareness as to what was going on around him. He drummed into him Di Stefano’s approach: “Keep asking yourself, if I get the ball now, who will I give it to?”
Moore later said of Allison, “Every house needs a foundation and he gave me mine.”

When he turned 17, in April 1958, Bobby was offered professional terms at £12 per week. West Ham had just been promoted to Division One and he had no hesitation in signing.
Five months later, he was thrown in at the deep end, an injury crisis pushing him into the first team for the visit of Manchester United. Moore had a decent debut in a 3-2 victory, but any pride he felt in pulling on the claret and blue shirt was tempered by a cruel irony.
The previous season Moore’s mentor Malcolm Allison, had contracted tuberculosis. He had to have a lung removed, but trained relentlessly in an effort to return to the side, desperate to play a top flight game for the Hammers.
It was a straight choice between Moore and Allison for the place and manager Ted Fenton chose the younger man.
In his biography Moore told Jeff Powell: “For all the money in the world I wanted to play. For all the money in the world I wanted Malcolm to play because he’d worked like a bastard for this one game in the First Division… I wanted to push the shirt at him and say “Go on Malcolm, it’s yours. Have your game.”
Allison never got his First Division game. Bobby got four more that season and 12 in 1959-60. By the start of the 1960-61 season, aged 19 he was worthy of a permanent place in the first XI, a place he would keep for fourteen seasons.
When Ron Greenwood arrived at Upton Park in 1961 he was already familiar with Moore, having called him up to the England Under-23 side. He’d seen enough to know Moore was worth building a side around and despite his tender years he made him captain.

Moore quickly progressed to the full England side, a late addition to the squad that travelled to Chile for the 1962 World Cup finals, and impressed enough in a warm-up game against Peru to keep his place through a tournament. By the time he earned his 12th cap in 1963 Moore was England’s youngest ever captain in place of injured regular skipper Jimmy Armfield.
In 1964 Ron Greenwood’s side landed the club’s first ever major honour. A heroic 3-1 win in the semi-final against Manchester United on a Hillsborough mud-bath earned Moore and his team a date with Preston North End at Wembley. In a thrilling final the Hammers twice came from behind to snatch a 3-2 victory with a 90th minute Ronnie Boyce goal.
A year after the Cup Final triumph West Ham returned to Wembley for the European Cup Winners Cup Final, and one of the club’s finest ever performances saw them defeat 1860 Munich 2-0.

It seemed to the world that Bobby Moore had it all. Winners medals with West Ham, captain of both club and country with the World Cup approaching, and Tina, his lovely young wife… but the world didn’t know all the facts.
In the year between those Wembley appearances there was a shadow over Bobby’s seemingly perfect life. In November 1964 Tina insisted that her husband see a doctor about a persistent pain in his groin. Testicular cancer was instantly diagnosed and a testicle removed. In shock, the 23 year old Moore went home to his wife, they sat on the floor in front of ‘Top of the Pops’ and wept.
In those stoic times they kept a stiff upper lip and shared the news with no one. After radiotherapy treatment the cancer appeared to have gone, but not the feeling that the Sword of Damocles was hanging over him.

One way or another it was fortunate that Moore appeared in the 1966 World Cup Final tournament at all. Unable to agree a new contract with West Ham, and with one eye on a move to Tottenham, Moore allowed his contract to expire. As an unregistered player he was not eligible to play in the World Cup Finals. Greenwood was summoned to the team hotel on the eve of the tournament and Ramsey ordered the pair to thrash out a compromise.
Ramsey’s side, after a cautious 0-0 opener v Uruguay, negotiated the Group stage with 2-0 victories over Mexico and France. Argentina were beaten 1-0 in ill-tempered quarter-final and Portugal offered a stern test in the semi-final but two goals from Bobby Charlton ensured the hosts a World Cup Final fixture against West Germany.
With Moore’s West Ham team mates Geoff Hurst and Martin Peters in the side there was a distinct Upton Park influence. The Germans took an early lead, but Moore’s quick thinking soon led to an equaliser. After being fouled Moore leapt to his feet and launched a quick free-kick upfield for Hurst to head home. It was straight off the West Ham training ground.England took a 78th minute lead when a Hurst shot was blocked and Peters seized on the rebound, but the Germans’ 89th minute equaliser took the game into extra time.
Hurst’s two goals, one controversial, one unstoppable, completed the 4-2 victory and Bobby led his triumphant team up the steps.
Thinking one step ahead, as usual, Moore wiped his muddy hands on the Royal Box’s velvet drapes before shaking the white-gloved hand of the Queen who presented him with the Jules Rimet trophy.

This was as good as it got for Moore. His place in the nation’s affections was sealed, but neither England or West Ham could provide  him with any more medals. The Hammers didn’t live up to their mid-sixties promise, becalmed in mid-table for season after season.
England travelled to Mexico for the 1970 World Cup with high hopes of defending their World title, but no one could have beaten Brazil that year. At their meeting in Guadalajara England produced two moments which have a claim to be the greatest of their type. The ‘Greatest Save’ which saw Gordon Banks deny Pele; and the ‘Perfect Tackle’ which saw Moore pick off the superb Jairzinho with the accuracy and timing of a sniper… and still England lost.
West Germany gained their revenge in the quarter-finals, England squandering a two goal lead, and Moore and his team mates flew home, probably not suspecting that England wouldn’t make another World Cup until 1982.

In 1973 Moore had a poor game in a World Cup qualifier in Poland and was dropped for the disastrous return game at Wembley… the earth had shifted slightly on its axis. Moore was back in for his 108th, and final cap in November 1973, a friendly defeat to Italy in which Fabio Capello scored the only goal of the game.
Moore’s West Ham career was also at an end, with Fulham buying him for £25,000 in March 1974. Initially frustrated at not being able to join his old mentor Malcolm Allison at Palace, Moore went on to enjoy a four-season Indian Summer to his career at the Craven Cottage retirement-home alongside team mates Alan Mullery, Rodney Marsh and George Best. They even made the FA Cup Final in 1975, inevitably playing West Ham.

Moore retired aged 36, after a couple of spells in the States, with the intention of staying in the game. He was to discover that everybody loved Bobby, but no one wanted to employ him.
Bobby and Tina agonised over why it could be that nobody saw him as management material. Was it a level of suspicion left over from the Colombia bracelet incident before the 1970 World Cup when a jewellers’ assistant attempted to frame the England captain?
Was it that some of Bobby’s business enterprises seemed to blur round the edges into the East London/Essex gangland underworld?
Moore’s management CV amounted to a couple of years at Oxford City and an unsuccessful spell at Southend. Incredibly, neither England or West Ham ever called upon him for any kind of role.

By the early nineties Moore was a commentator on Capital Radio. In February 1993 it was announced that he had colon cancer, news that Bobby had kept to himself for two years. He visited Wembley one more time, to commentate on England v San Marino, and died on February 24 1993, aged 51.
The shock and grief emanated from Upton Park, where the floral tributes piled up, right across the world…

Editor of The FOX Fanzine - covering Leicester City for 23 years... it seems longer.
View all posts by thefoxfanzine →
This entry was posted in Uncategorized and tagged bobby moore, england, got not got, west ham united. Bookmark the permalink.