Posted on February 8, 2013 by thefoxfanzine

Apparently this is not a rare occurrence…!

Daniel ‏@Luzhniki2008 and Football Shirt Geek ‏@FootyShirtGeek both told us via Twitter that Chelsea turned up to Highfield Road in 1997 with only their blue kit in the hamper which was too close to Coventry’s Sky and Navy stripes. Chelsea ended up wearing a garish combination of their own shorts and socks with Coventry’s red and navy checked away strip.

Still on an international theme is perhaps the most globally embarrassing example of ‘wrong kit’ ever… as France and Hungary lined up in the tunnel before their Group A game at the Argentina 78 World Cup, they couldn’t help noticing that they were both wearing their own versions of Adidas white shirts.
Although Hungary’s red and France’s blue did not clash, Argentinian TV was only broadcasting in black and white and so one team had to wear white, though both teams seem to have got that message.
The kick off was delayed for half an hour while a new strip was frantically sought and it was local side Club Atletico Kimberley who came to the rescue, supplying a set of their basic cotton green and white striped shirts, which were worn by France. Kimberley’s rather sung fitting shirts served the French well, with them beating Hungary 3-1.

Incidences of ‘wrong kit’ for which we are still seeking photo evidence include: Leicester City wearing Burnley’s yellow shorts with their blue shirts on the opening day of the 1978-79 season;  ‏Middlesbrough v Man City at Maine road circa 1980. They wore United’s home strip! (mufcshirts.com@mufcshirts and Stuart Barstow); Reading refused to change their clashing away kit with Brighton home kit, so home team played in their own away kit. (Albion Roar ‏@albionroar); Everton once played in Luton’s away kit at Kenilworth Road. And don’t forget in 1984/85 many referees wouldn’t let us wear our space-age silver Le Coq Sportif kit so we had to cobble together a washed out yellow and black number. (When Skies Are Grey).

We are now working hard on ‘Got, Not Got 2′ but you can still get last year’s model. (Cunning punk rock reference). Available from branches of WH Smith and Waterstones or online here… 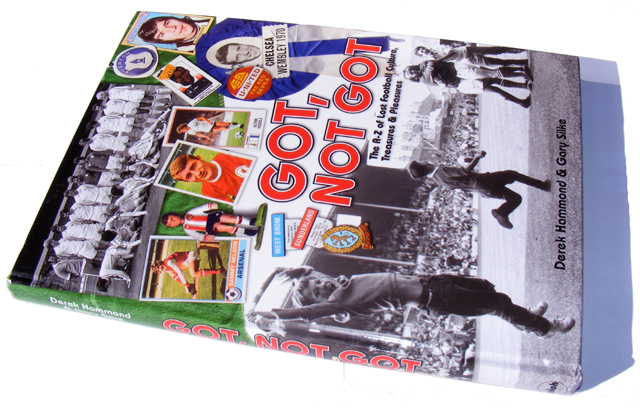