Yay! It’s the Quest for the Coolest Football Card Ever – Round 3, featuring Ernie Machin!

Introducing the third round of entries in the grand Got, Not Got Quest for the Coolest Football Card Ever.
First up is Cov’s Ernie Machin striking a thoughtful pose in the Wonderful World of Soccer Stars 1971-72 album. Not only is Ernie thoughtful and cool, he’s also clever, sending out subconscious messages to his many adoring fans: Ernie Machin… ma chin, geddit? 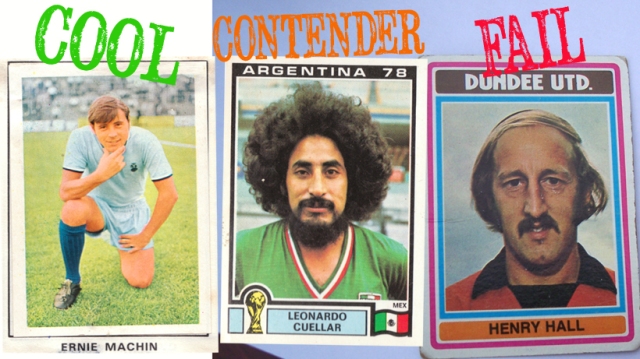 Next up is Mexico’s Leonardo Cuellar, as nominated by GNG reader Mark Allen. “This guy won me a trip to the FA Cup Final a few years back as he won (well must have absolutely pi55ed) a Hairiest footballer competition that Wilkinson Sword were running…” Yeah, like a big cool brown hairy flower, very groovy.
Meanwhile, top marks to Dundee United’s Henry Hall for his impression of Rene out of ‘Allo ‘Allo, and consolation points for being the only former St Johnstone player that we can think of. Great how Henners’ hairdon’t actually looks a bit like a beret.
Round 2 replay – Round 1 replay
There’s loads more where these came from, heading for an epic reader vote. If you’d like to nominate your own cool cats, contenders and loveable triers, please do scan or snap them and bung them to the usual address…

Got, Not Got – in the mixer for Football Book of the Year, and price hacked yet again on Amazon. Yours for the price of a round of drinks, delivered free…

1 Response to Yay! It’s the Quest for the Coolest Football Card Ever – Round 3, featuring Ernie Machin!